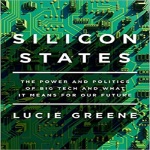 Google search results for ‘Trump News’ shows only the viewing/reporting of Fake News Media,” @realdonaldtrump. Google responds with a the shebang of algorithms and search results rankings and not political endeavors.

This was perfect timing on the new release book, Silicon States: The Power and Politics of Big Tech.  This new release book talks about  on “While the promise of technology is seductive, it is important to understand these corporations’ possible impacts on our political and socioeconomic institutions. Greene emphasizes that before we hand our future over to a rarefied group of companies, we should examine the world they might build and confront its benefits, prejudices, and inherent flaws. Silicon States pushes us to ask if, ultimately, this is the future we really want”.

As Silicon Valley faces increased scrutiny over its mistreatment of women, cultural shortcomings, and its role in widespread Russian election interference, we are learning where its interests truly lie, and about the great power these companies wield over an unsuspecting citizenry. Then came another bombshell intrigue today from President Trump. Trump appeared to be referencing a story published in recent days by conservative outlet PJ Media, which claimed that Google was “deprioritizing” content from conservative websites. The story was picked up by other conservative outlets including Breitbart.

All while Twitter, Facebook and Google executives are soon to appear on the Congress of the United States about election interference and censorship.

Back to the business of book selling, indeed for years search results was very much influence by content and users searching. However, agreeably it became a business on CPC and clicks for conversions. And wallah, if you are are small independent bookstore in  town which is usually known by the locals, guess what unless you search yourself with a specific name or locality and simply make a general bookstore search, do you think you will ever see your store? Of course, “NO” Pay to be on top of the first page and top of that page and then yes you will be able to search yourself.

Even making simple google searches on buy books, best online bookstores, it’s the same pages for years and years with the same companies and results on the first page will forever be the same as if they never get updated. The big answer is “$” as the biggest spenders to pay who also gets the monopoly of the clicks and traffic.  Thank God in the recent earlier years for the evolution of social media as another advertising way to promote. Then the same $ started with social media and hence today with have such issues as censorship and election interference.

We’ll end this short discussion considering is it really time to “Regulate” so there is some control instead of the business of money talks?