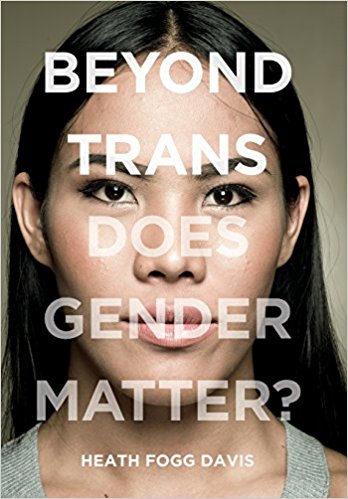 Beyond Trans: Does Gender Matter?

Obviously this book needs to be read by President Trump. Trump announced today that he is banning Transgender individuals in the US military. At least he just confirmed what he started in his presidential campaign about his issues on Women. Dah, yes transgender individuals are categorized as Women.

All the years on fighting to have Gay men accepted in the US Military just went down the drain as soon as this announcement was made today that “Trans” individuals are not going to be accepted in the US military. I guess the question now has to be legislative. Is it finally time that the executive privilege of a sitting president be scrutinized in terms of race and equality rights in the  military? The president who is commander in chief and the top supreme leader of the military also gets to decide who he wants to serve? @twitter Mr. Trump says he consulted with the top brass on this decision?

It has been said it’s showmanship being the “Mr. Apprentice” but as the days and months go by, it clearly gives more direction that truly this is not the work of a newbie politician but something more than that.  Trans individuals goes through a lot of challenges just on showing that they have the same rights as any other citizen. They have to advocate for themselves in society and at times really face criticism and acceptability. The leader of the free world should be their friend and supporter as being foe just earned more rejection in terms of being not supportive of race and equality challenges.

Hence, will let you decide on which side your on. At least, read this book first and learn more about Beyond Trans